Many Rhode Island libraries reside in historic buildings and contain legacy artwork that may eventually need attention and care. This was the case with a large framed 19th-century needlework at Peace Dale Library depicting Gilbert Stuart's Landsdowne portrait of George Washington. It has hung in the Library's Rhode Island History Room for decades and its provenance and creator are unknown. Over time, staff and patrons had noted that threads appeared damaged and canvas showed through, and suggestions had been made to have the piece looked at by the University of Rhode Island's Textile Conservation Laboratory.

The Library has had a long-standing relationship with the Narragansett-Cooke-Gaspee Chapter of the Daughters of the American Revolution, who over many years have generously donated books and shelving for the Library's local history collection. Since the needlework's subject matter was George Washington, the Library approached the Chapter in the spring of 2017 to ask if they would be interested in exploring the possibility of a restoration. They agreed, and the Library contacted the Textile Conservation Laboratory to set up a visit.

The Laboratory, for a nominal standard fee, will examine an item and prepare a "Conservation Analysis & Recommendations and Treatment Report". Rebecca Kelly, Director of the Laboratory, and one or two of her students came to the Library to take a look at “George”. On the basis of that visit, they produced the report laying out the anticipated work and costs. This was shared with the DAR Chapter, which agreed to fund the project.

Once this was all determined, Director Kelly returned to the Library to transport "George" to the Laboratory on the University's Kingston campus.  Over the next 15 months, "he" underwent various conservation procedures, including vacuuming away dust and particles; microscopic examination of fibers; and detaching webbing and newspaper used in previous framing. “He” was then fitted with a cotton-covered acid-free backing, and placed in a new frame with spacers to keep the embroidery out of contact with the protective glass.

Framing was done at the Laboratory, with components brought there by the framer, eliminating the need for transport to a different location. The cost of framing, separate from the conservation itself, was shared equally by the DAR Chapter and Friends of the Peace Dale Library.

The project took nearly two years, longer than if the Library had used a professional conservation firm, because the University's Laboratory is a teaching facility. But it was gratifying to all involved to be able to work together--the Peace Dale Library, the DAR Chapter, the Friends of the Peace Dale Library, and the Textile Conservation Laboratory. The Library’s needlework picture is now set for another 150 years. The DAR Chapter helped to preserve a public artwork featuring a principal figure of the American Revolution. A number of Textile Conservation students had an opportunity to participate in the research and assist with aspects of the work.  And the Friends of the Peace Dale Library made a lasting contribution to one of the cultural resources housed in the Library.

“George”, newly vibrant, came "home" in May, 2019. On May 22 the Library hosted a public unveiling, with Rebecca Kelly as the featured speaker. As the next century of life for this historic artwork begins, we invite all in the community to come take a look! 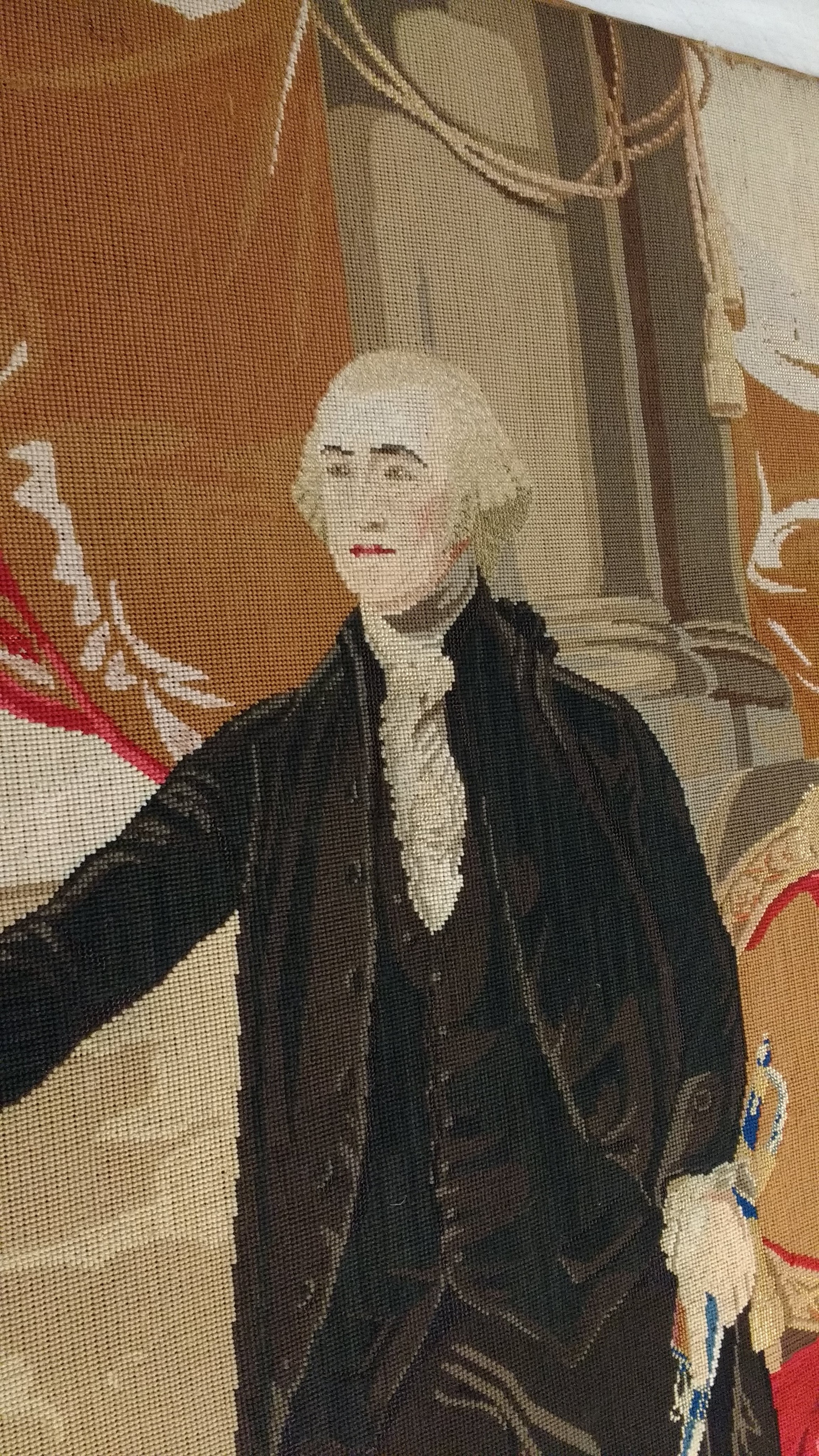